It is common among English users to hesitate in speech, and even more in writing, when about to utter or write ‘amongst‘. Our second instinct, if ‘amongst’ is our first, is to autocorrect and switch to ‘among‘ – indeed many online or built-in spellcheckers encourage us to do so, as if ‘amongst’ was actually wrong. But is it? And, if it isn’t, what’s the difference, if any? (Pedants can save the debate of whether to start two consecutive sentences with conjunctions for another time!) 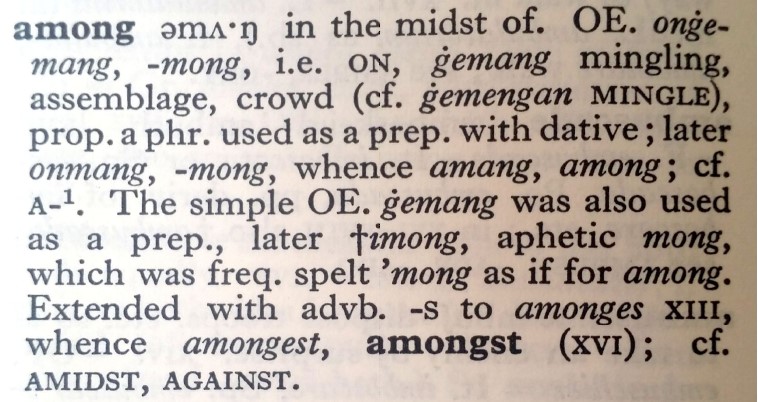 ‘Among’ – Oxford Dictionary of English Etymology, 1966

Definition of Among and Amongst?

Few would struggle with the definition of ‘among‘ meaning “in the midst of…, a member of…, occurring within…”. ‘Amongst‘ means exactly the same, and so is a variant spelling/direct equivalence synonym.

“Among is the earlier word of this pair: according to the Oxford English Dictionary, it first appeared in Old English. The variant form, amongst, is a later development, coming along in the Middle English period. With regard to their meanings, there’s no difference between among and amongst.” – Oxford Dictionaries

Origins and Etymology of Among/st

Old English ongemang (from on ‘in’ + gemang ‘assemblage, mingling’). The –st of amongst represents –s (adverbial genitive) + –t probably by association with superlatives (as in against). – Oxford Dictionary

among (prep.)
mid-13c., amonges, from among with adverbial genitive. Parasitic -t first attested 16c. (see amidst). It is well established in the south of England, but not much heard in the north. By similar evolutions, alongst also existed in Middle English. – Online Etymology Dictionary

So, ‘among’ is a 12th century Old English word which, over the 13th-16th centuries, added an ‘-s’ and then a ‘-t’. A word meaning “mingling” thus got a mangling, which has led to our modern muddling of the two.

What we have then is no difference in meaning, and while/whilst (yes these two words, while and whilst, have similar issues and origins, though ‘whilst’ has a more limited range of use) both ‘among’ and ‘amongst’ are old words, one is simply older. Again and against, however, developed separate meanings by the 16th century, despite similar developmental paths. Amid and amidst are further examples of ‘-st’ adding as a linguisitc or literary flourish, as are along and alongst, although it seems that adding ”st’ to unbeknown (1824), creating unbeknownst, is a Victorian addition (1848), which became the more frequent of the two words in US English.

The word ‘among’ sits amid the top 1000 most commonly used words – depending on who you ask – but not ‘amongst’.

Comparative Usage of Among and Amongst

With* American English users ‘among’ is more common, whilst amongst British English users, instances of ‘amongst’ increase. In the Oxford English Corpus (OEC) there are 11.54 times as many instances of among compared to amongst (8.36x in British English and 30.42x in US English). [* yet another sentence beginning with a conjunction – as synonyms for ‘among’ are few and far between, other than ‘amid’, ‘with’, ‘in’.]

In American English, the Corpus of Historical American English (COHA) reveals that back in 1810 the ratio was like that of British English – around 9x or 1-in-10 occurrences. By 1980 that ratio was over 66x, but around 1950, 1970, 1990 there was some resurgent usage in literature. It has fallen in popularity again, since, now that web documents make up the bulk of statistical analysis.

Amongst Pretentious and Old Fashioned?

Despite the older origins of ‘among’ it is ‘amongst’ that is considered “old fashioned” and even pretentious by US English aficionados [from the Spanish aficionar “inspire affection”].

“Amongst” and “amidst” are perfectly fine words, listed in dictionaries and everything, but they fall a bit on the “I know big words” scale of writing. – Columbia Journalism Review

“amidst, amongst, and whilst are all pretentious affectations and should never be used in your writing if you want to be taken seriously.”

Daly goes to analyse and point out that Jane Austen’s Pride and Prejudice (1813) uses ‘amongst’ 7x to ‘among’ 17x, probably one of the closest ratios over time. Meanwhile Charles Dickens never uses any ”-st’ form of the words under discussion – or at least his editor and publisher didn’t.

Bryan A. Garner’s Modern American Usage describes ‘amongst’ as “more tolerable in British English” but “pretentious” in American English.

What can be confusing, is that spellcheckers and autocorrect features, even with British English dictionaries, will often mark ‘amongst’ as just plain wrong or suggest correction to ‘among’, making users less confident in its use and driving down its frequency. In the end, it’s a question of choice and taste over style, not right over wrong. Amongst, is almost as old as among, but cannot be called the more antiquated or pretentious of the pair. If anything, the true professional pedant should feel free to redeem its use with a flick of floriate flourish in conversation, and feel confident enough to argue for its antiquity and authentic use, so long as you don’t mind sounding like Mr Darcy!